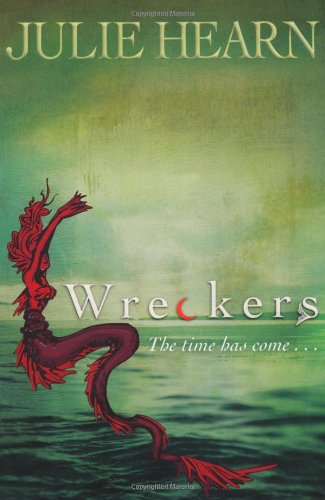 When a plain wooden box washes up a Cornish beach in the 1700s, no-one realises the horror that hides inside. The box lays hidden in a nearby mansion, until five teenagers uncover the box years later. When they open it, they will put the whole world at risk.

Review: It took me a while to realise that the modern day setting for Wreckers is actually an altered reality, where London was completely destroyed in a terrorist attack. The British King has frozen the borders so no-one can leave or enter the country; news is highly restricted; mobile phones, technology and transport systems have been taken away; and strangers are a very uncommon occurrence. The world has united to prevent the seas and the ozone dying, and eco-christianity has become the hottest new religion. I like the concept for this setting, but I did find myself rather muddled at the start trying to figure out some of the dialogue and references to this new alternate reality.

For some reasons I also expected the story to be about mermaids, maybe it was the cover image and because I didn’t know that Wreckers referred to those living on land in the 1700s who salvaged goods that have have washed up from wrecked ships. Instead the focus was around one box in particular - Pandora's box. Without giving away too much, I was also surprised over what the box contained, as I expected it be darker and more sinister.

The story is told from six different perspectives: Maude, Dilly, Danzel, Jenna, Gurnet and a mystery voice. This last voice was all-knowing; it was able to explain the alternate reality that the teenagers lived in, the history of the box, and also what happens in the future. I enjoyed hearing the story from the different charcters perspectives, and felt that without the mystery voice I would have lost within the plot. However I couldn’t help but wonder whether this was because within the characters narrative’s things like the setting weren’t tied in enough.

Out of all the characters Dilly was my favourite, because she was down to earth, friendly and caring. I did however like all the characters including Gurnet with his knack for adopting stray or dangerous animals, and even brash Jenna who just about redeemed herself by being completely un-tempted by the box (a positive in my book).

There are several reasons that made me feel this book would be better suited to a younger audience: there was the potential to make the box’s content scary and dark but it wasn’t, so much so that Gurnet befriends what is inside; there wasn’t the depth of thinking behind the setting (personally I can’t see the world uniting peacefully to save the world, although I really wish it would happen!); and finally because the narrative was all-knowing, needing to explain everything from the past, present and future.