Catching Fire (The Hunger Games #2)
Author: Suzanne Collins
UK Publisher: Scholastic Press
Genre: YA, Dystopian
Summary: In the controlled and poverty driven country of Panem, those in the Capitol live in luxury whilst those in the 12 districts live in poverty and desperation. The brutal sport of sending children out to kill each other in the Hunger Games is run as a reminder that the Capitol rules.
As a survivor of the games, Katniss is now coming to terms with the impact her survival with Peeta has had on the Capitol and its repressed Districts. Seen as a symbol of rebellion and hope, Katniss realises she has sparked an unstoppable change in people, and is threatened by the President unless she can diffuse the likely rebellions in other Districts. Soon enough however his threats become a reality when the Quarter Quell reveals that once again Katniss must face the Hunger Games.
Can anyone escape the Capitol’s control? And can Katniss once again survive the Hunger Games?
Review: On reading the first in the series I picked up similarities to another story, Battle Royale, and felt that The Hunger Games was a similar slant on the theme of televised slaughter of young children. Having read this book, I can now see Suzanne Collin’s writing come into its own, the Panem world develop, and Katniss’s character grow and mature.
We delve further into the relationships between Katniss, Peeta and Gale, and the love triangle that exists between them. Katniss obviously loves and cares for both of them but in very different ways. Personally I like both Peeta and Gale, and like Katniss can't decide between them. The possibility of marrying Peeta, who is like her opposite - self sacrificing, open, honest and caring - scares Katniss,  as she tries to see what future there could be with either in a changing and dangerous world
The plot is made up of twisting turns, dramatic revelations, and brutal developments in the Capitol’s control of Katniss and District 12. Once again there is a sense of trepidation and shock at Katniss and Peeta entering another round in the Hunger Games, and what threats there might be. The suspense of what will happen during the games as well as to those that Kat loves builds with every page and keeps you glued to the story.
The theme of the series is one of repression, control and the fight for freedom. Success and hope of a rebellion rises and falls at different points in the story. With the Quarter Quell it seems that President Snow is determined to rid Panem of Katniss as well as other symbols of hope and survival. However there is a palpable feeling that change is on the horizon for citizens of the districts who are no longer willing to live under a regime of repression and poverty.
A gripping story, The Hunger Games will leave you thirsty for more.
Rating: 4*
1 comment: Links to this post 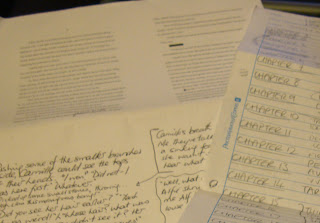 Over the past week I've started working on my story again. So far my word count is at 7,500+ words. It still needs a lot of work, but it's good to be writing and building on ideas.
Maybe one day I'll actually finish the first three chapters properly, and will be able to submit them to an agent!
1 comment: Links to this post

Email ThisBlogThis!Share to TwitterShare to FacebookShare to Pinterest
Labels: Work in Progress, writing

If you haven’t yet read Fallen, please be aware that this review contains *SPOILERS*.

Torment (Fallen #2)
Author: Lauren Kate
UK Publisher: Random House
UK Release date: March 2011
Genre: YA
Summary: Following on from Fallen and the discovery that her boyfriend Daniel is a fallen angel, Luce is moved from Sword & Cross and taken to a new school, Shoreline, in sunny California. Here she studies alongside Nephilim, the children of humans and fallen angels, and lives under a protective spell from Outcasts, rebel immortals who want Luce dead. We see her internal struggle as she tries to find out about her past lives by manipulating the shadows and comes to terms with her feelings for another boy. The angel versus demon dilemma continues, however the two sides agree to a truce in order to protect Luce – this lifetime is different from the rest of her lives, and what happens in this life will affect the balance between heaven and hell.
Review: Despite feeling slightly disappointed with Fallen, I was ever persistent and decided to read on with Torment regardless. It is an interesting and intriguing read, with lots of mystery and suspense thrown in. The plot is action focused with a steady pace: Luce gets into a dangerous situations trying to manipulate the shadows to find out about her past lives, as well as with the Outcasts hunting her.
In terms of characters, Luce finally rebels against Daniel and the restrictions he puts on her. Whilst I like the fact that she shows some “balls”, Luce is very naive about realising that she is in danger. I'm also sorry to say that I just don't buy Luce and Daniel's relationship, which is based on their past history and a few snatched moments of kissing. I understand that to make the story more interesting and to build up the mystery Daniel keeps a lot of information from Luce, however I feel it lessens the integrity of their relationship.
The introduction of Shelby and Miles however livens things up, and the developing relationship between Luce and Miles is really refreshing – finally something that resembles a real relationship!
I like the subtext that the difference between good and bad (heaven and hell, angels and demons) isn't as clear cut as it seems. This can be seen in the relationship and characters of fallen angel and demon - Francesca and Steven, as well as the partnership of other fallen angels and demons such as Daniel and Cam.  I will read Passion when it comes out because, darn it all, I do want to find out what happens next.
Rating: 4*
1 comment: Links to this post

Linger (The Wolves of Mercy Falls #2)
Author: Maggie Stiefvater
UK Publisher: Scholastic
Genre: YA
Summary (from Goodreads): In Maggie Stiefvater's Shiver, Grace and Sam found each other. Now, in Linger, they must fight to be together. For Grace, this means defying her parents and keeping a very dangerous secret about her own well-being. For Sam, this means grappling with his werewolf past . . . and figuring out a way to survive into the future. Add into the mix a new wolf named Cole, whose own past has the potential to destroy the whole pack. And Isabel, who already lost her brother to the wolves . . . and is nonetheless drawn to Cole.
Review: Linger continues on from Shiver, where Sam was cured of being a wolf. Now he is the only member of the pack who hasn't changed with the cold temperatures, and he has to come to terms with his new role and the loss of no longer being a wolf. Grace meanwhile has to face the returning threat that will soon change her life forever.
Whilst it is not a hugely action packed plot, there is a lot of suspense around what is happening to Grace and the new pack members. The story is however more character-orientated, focusing on the thoughts and feelings of the characters as well as the developing relationships. The narrative is split between the four main characters: Grace, Sam, Isabel and newest member of the wolf pack, bad-boy Cole. Despite being told from four distinct characters' perspectives, the story flows really well with the poetic quality of the writing buoying you steadily along.
Sam is such an adorable character - caring and thoughtful, he must deal with the changes of not being a wolf. I really love the way he thinks of everyone else, and has overcome his past. This is in contrast to Cole, who took his life to the excess with alcohol and drugs and not letting anyone in emotionally, but you do see some rare moments of change in him. Isabel develops more in Linger, and we see a more caring side of her. Grace has to stand up to her parents - in Forever hopefully we will see more of her as she faces up to the changes that have taken over her body. All of these characters have had different relationships with their parents, generally in a negative way, but are all dealt with in a very real and sensitive way.
Maggie Stiefvater's writing style is beautiful, flowing and very poetic. Sam's narrative is infused with little songs and rhyme and the plot encompasses lots of little 'moments' that happen in real life and make the story feel so real and alive. They are really only tiny little details, but I found myself thinking, oh yes I do that, and it made the story so much more intimate and real.
I did get a little frustrated knowing from the start that Grace would change, but having to wait to see what exactly would happen and when. The 'science' behind this however is interesting, and I really enjoy the refreshing way the whole series takes a very different approach to the were-wolf scenario. In fact you certainly wouldn't call Linger a were-wolf story, and this is down to the focus on the characters and the fact that the shapeshifting is more transformational and emotional, more natural rather than dramatic like most wold stories.
Rating: 4*
1 comment: Links to this post

Apologies again....As I posted this up on my 365 diary, I thought I would post it here, as I haven't been able to write any other proper posts for a while....
The day of my Publishing exam: I sit and wait. I drink coffee and eat a croissant. 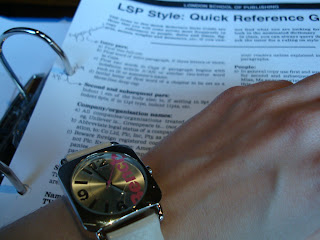 Now the exam is over, I must wait some more before I know if I passed.
I hope I did.

Email ThisBlogThis!Share to TwitterShare to FacebookShare to Pinterest
Labels: Random

Dear bloggers, please forgive my absence. Tomorrow I have my Editorial & Proof-reading exam, which I'm really nervous about. I've also been reading lots of books, but haven't got around to reviewing any yet. But I have spent lots of time with Dani, my lovely other half. Sometimes we all need a little time for ourselves.

Hopefully my exam tomorrow will go well, and I'll be back on top of my blog again after that and visiting all your lovely blogs like I should be. Until then, sweet dreams. 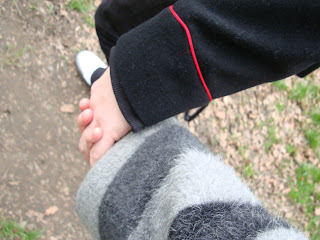