Apologies my dear friends for being so absent and neglectful of my blog. Work has been busy (I'm really hoping to win the lottery so I can quit and spend more time writing!) and I started my creative writing course which is bringing up lots of ideas but sadly no secrets on how to write the perfect book ;)

I've still been reading away...and this is the latest, which I couldn't help but pick up what with its steampunk feel. Even though it was published a few years ago I'm going to review it anyway. So here we are.... 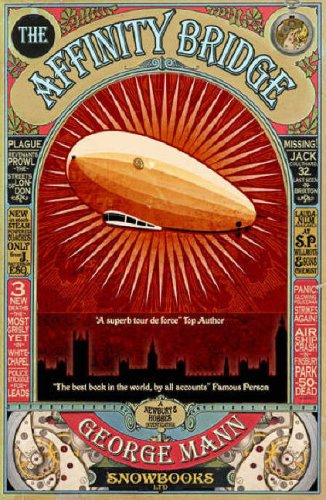 Summary (from Goodreads): Welcome to the bizarre and dangerous world of Victorian London, a city teetering on the edge of revolution. Its people are ushering in a new era of technology, dazzled each day by new inventions. Airships soar in the skies over the city, whilst ground trains rumble through the streets and clockwork automatons are programmed to carry out menial tasks in the offices of lawyers, policemen and journalists. But beneath this shiny veneer of progress lurks a sinister side. For this is also a world where ghostly policemen haunt the fog-laden alleyways of Whitechapel, where cadavers can rise from the dead and where Sir Maurice Newbury, Gentleman Investigator for the Crown, works tirelessly to protect the Empire from her foes.

... Once again, I picked up the book based on its cover. Well, old habits die hard. I love the idea of Victorian London, which the book certainly built up with a steampunk feel - cue the laudanum addiction, airships, and horse drawn carriages. We follow the main characters, Sir Maurice and Miss Hobbes, as they investigate an airship crash where all the passengers had been tied to their seats and the pilot was missing. Some of the ideas are a little stereotypical and cliche, but I still liked it.

The plot moves very quickly keeping you on the edge of your seat, albeit wondering how one man can take quite so much physical abuse whilst the chief of police comes out completely unscathed. There were a number of twists and turns in the story as well as a final twist in the epilogue, however some parts of the ending felt a little forced trying to tie up all the loose ends and numerous subplots.

Despite its minor flaws, I'm a very forgiving reader and would definitely read the others in the series.